EVENT
ASSEMBLIES
THE SONS OF LIBERTY
RADIO
BRADLEE
DEAN
ALARM FOR WAR
STEPHANIE JOY
Home - The Dean-As The Cover-Ups Continue : Young Military Men Are Dying In Their Bunks and Not A WORD From The Mainstream Media

As The Cover-Ups Continue : Young Military Men Are Dying In Their Bunks and Not A WORD From The Mainstream Media

“83 soldiers died at Fort Bragg in the 18 months ending June 2021. Only 11 of those deaths were from natural causes. Fort Bragg hasn’t announced any fatalities since then. They’re still happening, but the base has gone dark.”

Friends, most are now awake to the fact that the government in this country has now gone rogue. They have been deceiving the people on a daily basis (Proverbs 19:9) and murdering its own citizens in the light of day since at least 1973 (Proverbs 6:17). It is no secret.

One thing I have said to my radio listeners, year after year, is that if the American people roll over in the face of a government that advocates the murders of innocent babies, how long do you suppose it will be before it is you for whom they will be coming (Galatians 6:7)?

Call me what you will, but it is exactly what is happening today through the latest of created crises that have been contrived by the corrupt (John 10:10).

Then again, American have seen the history that led up to the last 3 years concerning this plandemic (Jeremiah 11:9).

Recently, Wayne Depree took the time to make Americans aware of the realities which are before our very eyes and ears today. Wayne shared the following:

There’s A Lot of Young, Healthy Servicemen Suddenly Dying in Their Bunks, and The Military Won’t Talk About It

There is something very odd going on at Fort Bragg.

So, incredibly odd, that an investigative reporter and the contributing editor of Rolling Stone Magazine wants to know what the heck is going on.

His name is Seth Harp, and he’s been following a disturbing story out of North Carolina, involving A LOT of servicemen who are turning up dead in their bunks at Fort Bragg.
Here’s what Seth said in a tweet from February 9th, 2022,

"83 soldiers died at Fort Bragg in the 18 months ending June 2021. Only 11 of those deaths were from natural causes. Fort Bragg hasn’t announced any fatalities since then. They’re still happening, but the base has gone dark.” 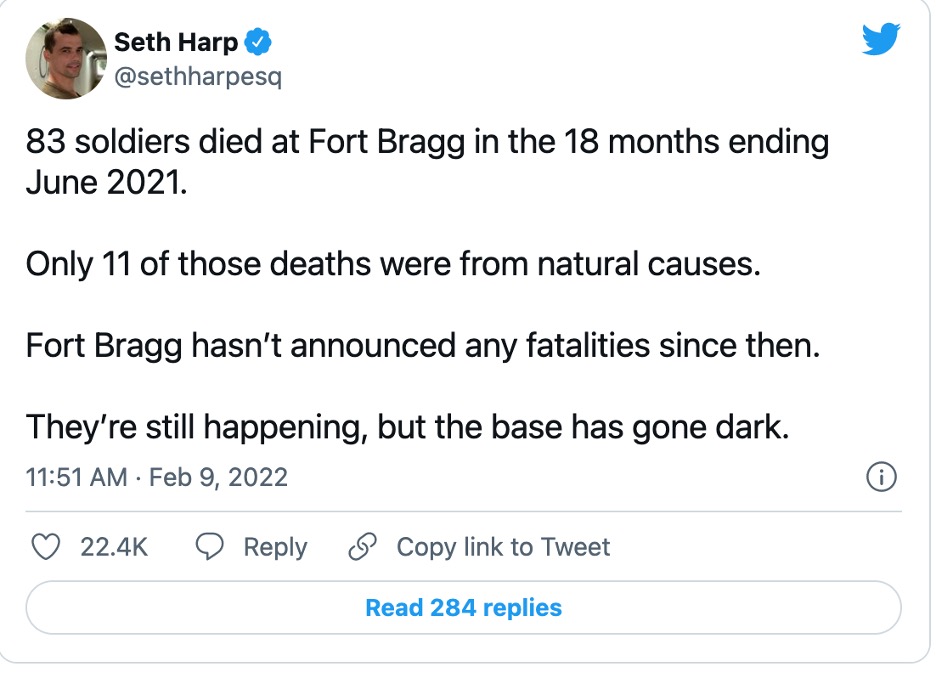 Back in January 2022, Seth wrote about this for Rolling Stone. In that piece, he discusses the MANY mysterious deaths occurring at Ft. Bragg since early 2020.

He writes: meanwhile, Fort Bragg soldiers have been turning up “unresponsive” in their barracks on a disturbingly regular basis since the beginning of 2020, including Caleb Smither, Terrance Salazar, Jamie Boger, Joshua Diamond, Matthew Disney, Mikel Rubino, Michael Hamilton, and numerous others who have not been named. Drugs may have been involved in the cases of Diamond and Disney, who were found dead on the same day in June 2021, just two weeks after an airborne master sergeant named Martin Acevedo III was charged with trafficking cocaine. Otherwise, there has been absolutely no explanation from the Army for how these apparently healthy young men died.

How long do you suppose Americans are going to continue with their eyes and ears closed to the obvious? That is up to you (Psalm 94:16)!

Article posted with permission from Sons of Liberty Media.  Article by Bradlee Dean.